Over the years, there have been many different rifles used in war.  You can count them from the earliest musketeers, all the way through modern times where current armies are using the most technologically advanced AR-15 assault rifles equipped with the best optics on the market.  No matter what way you slice it, thousands of different weapons have been used through the years.  Below you will see a detailed breakdown of some of the best rifles that we’ve seen used and some of our favorites of all time.

#1.  The Springfield M1 Garand:  The M1 Garand is absolutely one of our favorite rifles of all time.  The 30-06 caliber brings a large amount of stopping power and this rifle is tried and tested.  There are thousands of these older WWII rifles floating around the United States that are still fully functional and can serve as some of the absolute best rifles in any survival situation.  Many people have sworn by them and will not part with them.  Expect to pay upwards of over 1000.00 USD if you are looking for one in good condition, especially if it’s a vintage WWII era rifle and not a replica/remake.  These rifles were absolutely easy to make and easy to sight in using the metal crosshairs or using any of the best rifle scope choices that were available at the time. 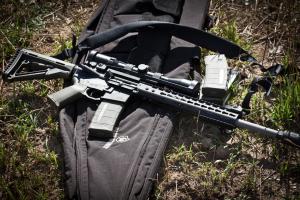 #2.  The AR-15, America’s Assault Rifle:  One of the great things about the AR-15 is that it’s a practical firearm that’s not only modern but stored in hundreds of thousands of houses across America today.  The AR-15 is one of the most beloved firearms in America and is one of the most widely used by both police officers and military personnel.  This makes it extremely practical to own one as if there were any type of survival or apocalyptic situation down the road, parts and ammunition would be plentiful.  The caliber itself is not nearly as big as it’s .308 caliber cousin, but it still does the trick.  The plain and simple fact that it’s stored in thousands of gun safes across the country makes this a must own for any firearms owner and should be at the top of the list if you don’t already have one.

#3.  The Mosin Nagant:  One of the all time great Russian and Chinese Rifles in WWII, the Mosin Nagant is the cheaper cousin of the M1 Garand.  Due to large amounts of imports and exports, the Mosin Nagant is now available in the United States and many collectors and amatuer firearms enthusiasts are flocking to this rifle.  It’s a great rifle to own, but ammunition and parts are more scarce than the M1 Garand and expect to pay more for ammo as well.

#4:  The AK47:  The AK is a firearms legent that’s owned all over the entire planet.   With over 80 Million AK’s in production, this tried and true Semi-Automatic rifle is very close to being one of the top rifles ever produced.  The biggest benefits for the AK-47 are the fact that it’s cheap, easy to maintain and extremely durable.  Many hardcore conditions that affect other rifles won’t even put a dent on the AK-47 making it one of our favorites.